Cerebral Aneurysm has always been labelled as silent killer, hiding in the brain without indications. No obvious symptoms but can kill patients in a second. Most of the time, the cerebral aneurysm was only revealed at the time it ruptured, leading to an acute stroke or severe headache for patients.

What is Cerebral Aneurysm？

A cerebral aneurysm is a ballooning arising from a weakened area in the wall of a blood vessel in the brain. It often looks like a berry hanging on a stem. 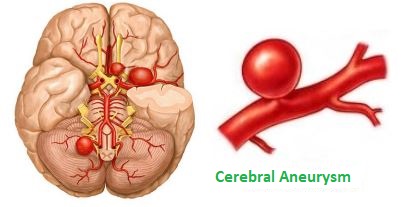 How does Cerebral Aneurysm form？

Cerebral aneurysm is a cerebrovascular disease. Aneurysms develop as a result of thinning artery walls. Aneurysms often form at forks or branches in arteries because those areas of the vessels are weaker. When the cerebral aneurysm expands and the blood vessel wall becomes too thin, the aneurysm will rupture and bleed into the space around the brain. This event is called a subarachnoid hemorrhage (SAH) and may cause a hemorrhagic (bleeding) stroke, mortality rate of which could be up to 36%.

The presence of a cerebral aneurysm may not be known until it ruptures. Aneurysms in children is appeared to be less likely to occur. They are most common in adults between the ages of 30 and 60 and are more common in women than in men. People with certain inherited disorders are also at higher risk. Inherited arterial wall weakness may be a factor in aneurysms. Occasionally, severe head injuries or infection may lead to the formation of aneurysm.

In Hong Kong, there are about 5 cases for every 100,000 people, mainly middle-aged. The male to female ratio is 1 : 2. Smoking, high blood pressure, injuries or cerebral artery injuries are more commonly causes of cerebral aneurysm

What are the Symptoms of Cerebral Aneurysm？

Most cerebral aneurysms do not show symptoms until they either become very large or rupture. Small unchanging aneurysms generally will not produce symptoms and mostly were only revealed after physical examinations. Occasionally, there may be symptoms that happen before a rupture due to a small amount of blood that may leak. This is called “sentinel hemorrhage” into the brain. Some aneurysms are symptomatic because they gradually grows in size and press on adjacent structures, such as nerves to the eye. They can cause visual change/loss or diminished eye movements, even if the aneurysm has not ruptured.

A ruptured aneurysm quickly becomes life-threatening and requires prompt medical
treatment. 20-30% patients died before they were sent to the hospital. If the ruptured cerebral aneurysm is not treated in time, 40% of those will rupture again in the following six months, and the mortality rate will be increased to 70%

Aneurysms may rupture and bleed into the space between the skull and the brain
(subarachnoid hemorrhage) and sometimes into the brain tissue (intracerebral hemorrhage). These are forms of stroke called hemorrhagic stroke. The bleeding into the brain can cause a wide spectrum of symptoms, from a mild headache to permanent damage to the brain, or even death.

In addition to a severe headache, common signs and symptoms of a ruptured aneurysm include nausea and vomiting, stiff neck, blurred or double vision, sensitivity to light, a drooping eyelid or loss of consciousness.

After an aneurysm has ruptured it may cause serious complications such as:

Rebleeding – Once it has ruptured, an aneurysm may rupture again before it is treated, leading to further bleeding into the brain, and causing more damage or death. Change in sodium level – Bleeding in the brain can disrupt the balance of sodium in the blood supply and cause swelling in brain cells. This can result in permanent brain damage.

Seizures – Aneurysm bleeding can cause seizures (convulsions), either at the time of bleed or in the immediate aftermath. While most seizures are evident, on occasion they may only be seen by sophisticated brain testing. Untreated seizures or those that do not respond to treatment can cause brain damage.

An unruptured cerebral aneurysm may produce no symptoms, particularly if it’s small. It may only be revealed until physical examination. For larger unruptured aneurysm, it may press on brain tissues and nerves, possibly causing:

How the Cerebral Aneurysm is diagnosed？

When there is a suspecting ruptured aneurysm, a Computed Tomography (CT) can be used to detect intracranial hemorrhage. The disadvantage is that the cause of the hemorrhage cannot be clearly indicated. After injecting with a contrast dye into patient’s bloodstream, the aneurysm can be visualized through a special imaging technique called Computed Tomography Angiography (CTA), which produces sharper, more detailed images of blood flow in the brain arteries. CTA can show the size, location, and shape of an unruptured or a ruptured aneurysm.

Magnetic Resonance Imaging (MRI) uses computer-generated radio waves and a magnetic field to create two- and three-dimensional detailed images of the brain and can determine if there has been bleeding into the brain. Magnetic Resonance Angiography (MRA) produces detailed images of the brain arteries and can show the size, location, and shape of an aneurysm. MRI is a technology of radiation-free, harmless and painless, which is totally different from the radiative X-ray Scan. No contrast dye is required during examination.

MRI can be used to screen different parts of the body, including a whole-body MRI examination for asymptomatic patient to detect signs of potential stroke or cancer. 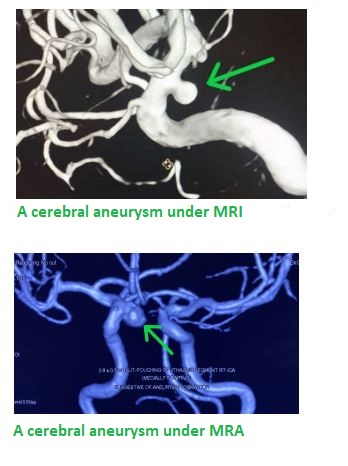 Factors to be Considered in Making Decision on Treatment Options

Neurological status, underlying disease, age, location, size, and shape of the aneurysm, risk of aneurysm rupture, existing treatment conditions, and nature of the aneurysm (ruptured vs. unruptured) are the factors to consider in making treatment decisions. The doctor will analyze and propose the most suitable treatment for the patient based on the above factors.

For example, aneurysms located on the dorsal side of the brain are more safely embolized with titanium coils. For elderly or critically ill patients, endovascular intervention is more advantageous because it does not require prolonged deep anesthesia. Open surgery is a good option for healthy young adults because of the better long-term result with clipping. In general, doctors will propose the treatment option with the lowest risk and the highest success rate for the patient.

The purpose of treatment is to prevent bleeding or rebleeding of the affected area caused by rupture of the aneurysm. Once an aneurysm ruptures and bleeds, there is a high risk of rupturing again, especially within 48-72 hours after the first bleed, and each bleed reduces the patient’s chances of recovery.

When making the decision on the way to treat an unruptured aneurysm, there is usually a trade-off of risk, and it varies from each patient. Below are some of the factors to be considered:- 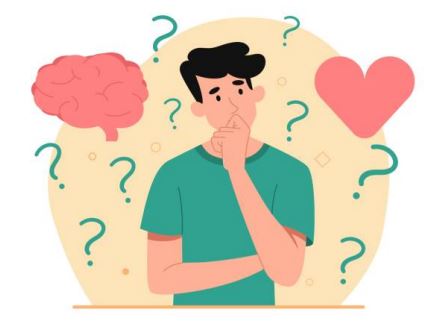 Points to Note Before & After Surgery

The risks and complications of minimally invasive surgery are basically similar to those of traditional clipping surgery. Patient’s condition, size and location of aneurysm, all are the factors that determine surgical risk. The surgical risk of ruptured aneurysms is approximately 10% to 20% while risk of rupture can be high as 30% for larger aneurysms growing deep inside the brain. A hemorrhagic (bleeding) or ischemic stroke can be occurred few days after the aneurysm was treated. Risk of anesthesia is usually in relation to age and heart, lung, liver and kidney functions, and an anesthesiologist will usually be consulted before surgery.

The risks of surgery itself include bleeding, infection, and nerve damage. Another surgery to remove blood clot or decompression may be required in case of rebleeding or severe ischemic stroke after the surgery. Mild infections are usually treated with antibiotics, but severe infections (e.g. brain abscesses) may require surgery. Basically, the probability of requiring another surgery is less than 8-15%, and most of them are due to hydrocephalus and need to place a ventriculoperitoneal drainage device. Due to the lower brain damage for Endovascular Neurovascular Surgery, the proportion of nerve damage is also lower than that of traditional craniotomy. Any neurosurgery may have the risk of death, paralysis or persistent vegetative state. However, surgical risk can be significantly reduced if the surgery is performed by an Endovascular Neurovascular Neurosurgeon who is experienced and licensed to operate digital subtraction angiography equipment for endovascular treatments.

Other surgical risks and complications include the followings：

The content of this Introduction and Treatment Overview is for general and reference purposes only. It aim to enable patients and their families to have a basic understanding of the disease and different treatment options before deciding to receive treatment. Patients need to make their own treatment decisions based on their actual conditions. This Overview does not provide a diagnosis or recommended treatment for any individual patients. Any treatment plan has its potential risks and hence patients must cooperate with medical staffs and doctors.

What is Ischemic Stroke?