Most people interested in understanding brain disorders, but read or heard much of the information nor is getting the right knowledge to be reported, even many incomprehensible content. Moreover, medical advances, new facts were clarified.  Brain is a very complex organ, still has many mysteries unsolved, for understanding brain diseases, to obtain the correct knowledge, we will be starting from the known brain systems.

Divided into left and right hemispheres of the brain, brain hemispheres, the central part of the basal ganglia.   Appearances hemispheres can be divided into several lobes, the front portion, about where the forehead known as frontal, is the top part of the parietal lobe, sleeping on a pillow where the occipital lobe, beneath the frontal lobe and parietal lobe is the temporal lobe, General commonly known as the location of the temple is located.

Lower end of cerebral hemispheres connected to the brain stem, brain stem control swallowing, breathing and heartbeats and other life-sustaining functions can be subdivided into the midbrain, Pons and medulla oblongata in three parts. Brain leaders handed out 12 pairs of cranial nerves cranial nerve nuclei of the message.  Therefore, the medical uses of “brain stem death” as a standard to one people lost their lives.

The cerebellum is located in the posterior Fossa brain, the cerebellum in sensory perception, coordination and motor control plays an important role in it.   Are connected by pathways, such as the sub thalamic nucleus and cortex of cerebellum, which dominate the coordinating role. Spinal cord extends from the brain stem and spine protection.

Vertebrae in the neck and lower back extensions, in the peripheral nerves of the spine white matter tracts, including sensory and motor neurons used to conduct sensory messages and motor commands. 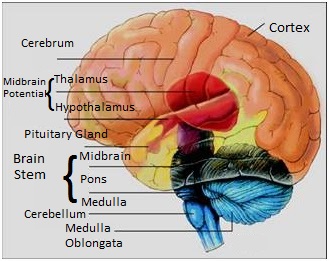